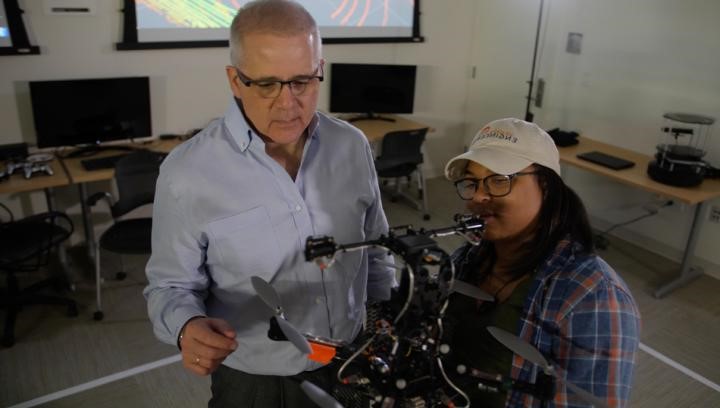 In addition to leading UVA Engineering since 2015, Benson and his research team have made significant advancements in the field of geoenvironmental engineering.

Craig H. Benson, dean of the University of Virginia School of Engineering and an internationally distinguished environmental engineer, has been elected fellow of the American Association for the Advancement of Science.

AAAS awards the lifetime honor to those with “extraordinary achievements in advancing science,” according to the organization’s release. Benson and 415 other fellows from around the world, who will be announced in the November 28 edition of Science, have “diverse accomplishments that include pioneering research, leadership within their field, teaching and mentoring, fostering collaborations and advancing public understanding of science.”

Benson is among five UVA faculty members elected 2018 fellows. UVA now has a total of 38.

“It is an honor to be recognized by an organization that has done so much to advance multidisciplinary science, engineering and innovation for the betterment of humanity,” Benson said, “and to be included among AAAS fellows who have dedicated their lives to creating and disseminating knowledge.”

In addition to leading UVA Engineering since 2015, Benson and his research team have made significant advancements in the field of geoenvironmental engineering. Benson’s work focuses on the design of extremely long-lasting containment systems for municipal, hazardous and radioactive wastes, and he developed a natural landfill cover system that is used around the world. He is a member of the National Academy of Engineering and the National Academy of Inventors and a Fellow of the ASTM International standards organization and the American Society of Civil Engineers.

Under Benson’s leadership, UVA Engineering has made significant strides. Sponsored research funding has grown by 74 percent since fiscal year 2016. The school also has dramatically increased its graduate program; among the top-40 graduate engineering schools in the country as ranked by U.S. News & World Report, UVA Engineering is now No. 1 in the country for the rate of growth in its Ph.D. enrollment. UVA is also the top public engineering school in the country for its four-year graduation rate of undergraduate students, among the U.S. universities participating in the American Society for Engineering Education’s “Retention and Time to Graduation Survey.”

The school also has affirmed its commitment to diversity, adopting diversity as one of its five core values and signing on to the American Society for Engineering Education’s Deans Diversity Initiative. UVA Engineering remains the top public school in the country for its percentage of women earning undergraduate degrees, among schools with at least 75 graduates. UVA’s position as the top public engineering school for graduation rates includes its four-year graduation rate for African-American and Hispanic students.

Benson has published more than 300 scholarly papers and has received multiple research awards, including the Ralph B. Peck Award, the Walter L. Huber Civil Engineering Research Prize, the Alfred Noble Prize, the J. James R. Croes Medal (twice), the Thomas A. Middlebrooks Award (twice), the Collingwood Prize, and the Arthur Casagrande Professional Development Award from the American Society of Civil Engineers. From ASTM International, he has received the Award of Merit, the Ivan Johnson Award for Outstanding Achievement and the Best Practical Paper Award (twice).

About UVA Engineering: As part of the top-ranked, comprehensive University of Virginia, UVA Engineering is one of the nation’s oldest and most respected engineering schools. Outstanding students and faculty from around the world choose UVA Engineering because of our growing and internationally recognized education and research programs, focused on developing interdisciplinary solutions to global challenges. Our mission is to make the world a better place by creating and disseminating knowledge and by preparing future engineering leaders. Learn more at engineering.virginia.edu.